This year, Nagarjuna scored a decent hit with the critically acclaimed multi-starrer, Oopiri, which also featured Karthi. If the ongoing reports are anything to go by, Nagarjuna has okayed yet another multi-starrer, which will have young hero Nikhil in a crucial role. The duo are likely to share screen space in a forthcoming film to be directed by Chandu Mondeti who is hot on the heels, with the success of Premam. 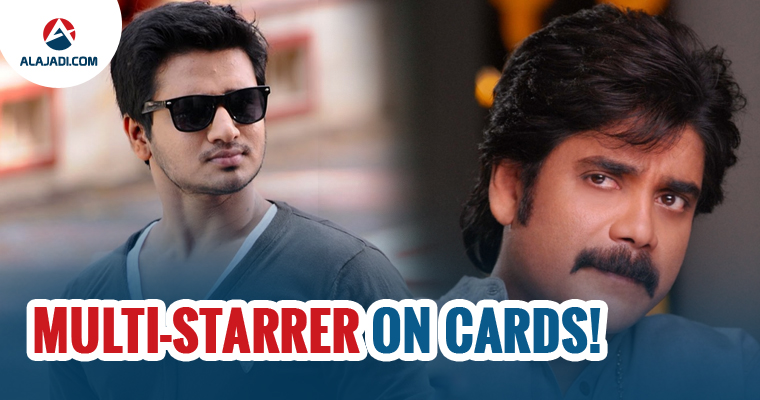 Nagarjuna has put all his energies on his upcoming mythological period drama Om Namo Venkatesaya. The prestigious film is directed by iconic director K. Raghavendra Rao. As this is all set for a grand release on February 10th, Nag is said to have signed his next film with director Chandu. Chandu who is self-proclaimed fan of Nagarjuna, has got a golden chance to direct Nag himself after successfully delivering Premam. Now Chandu is going to rope in his best friend Nikhil onto the board to which Nag too said to have given his nod.

If all goes per the plans, the film will roll onto floors after Nag and Nikhil’s respective commitments. The film is expected to take off after Nag’s Om Namo Venkatesaya hits the screens on Feb 10th. Yet to be titled, the film is being produced by Annapurna Studios. Meanwhile, Nag’s another commitment Bangarraju with Kalyan Krishna too is on cards. Since Kalyan is working with Naga Chaitanya presently, Bangarraju will go onto floors after this.

The reports further reveal that this crazy multi-starrer will feature Ramya Krishna and either Manjima Mohan or Mehreen Kaur as the female leads. Let’s wait for an official announcement in this regard.