The tenth edition of Indian Premier League comes to an end with Mumbai Indians lifting the cup for the third time against Rising Super Giants in a super thriller match at Uppal Stadium in Hyderabad. The Rohit Sharma-led Mumbai have been the outstanding team this IPL, with 10 wins from 14 matches.

Two times IPL winner Mumbai Indians won the toss and choose to bat, couldn’t put a huge score on the board. Under the captain-ship of Rohit Sharma, Mumbai team scored 129 runs losing 8 wickets with a leading score of 47 runs from Krunal Pandya. Chasing 130 runs, Pune started their innings on a slow pace without losing early wickets, but lost the match with a 1 run to Mumbai Indians. Though Smith was at the crease till last over scoring 51 runs, but to no avail. 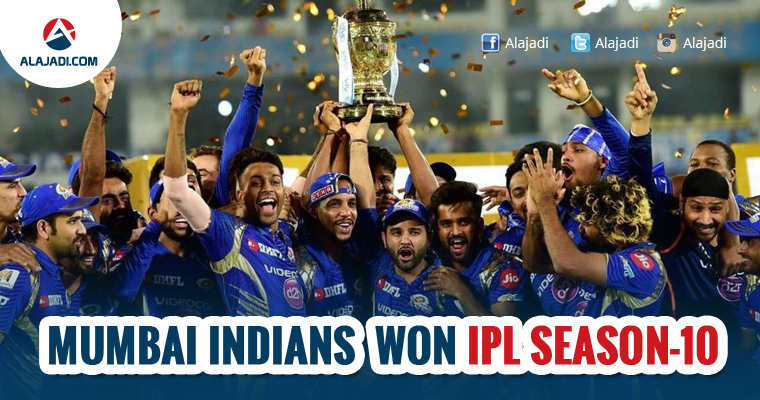 The stupendous bowling from Jasprit Bumrah, Lasith Malinga and Mitchell Johnson in the final overs pulled off this nerve-racking final match for Mumbai and brought the curtains down for IPL 2017. For his striking performance, K Pandya awarded Man of the Match. Sunrises Hyderabad, nonetheless, ended up the season with fourth position obtained Orange Cap for David Warner scoring 641 runs in 14 matches and also Purple Cap for Bhuvaneshwar Kumar taking 26 wickets.