Mother Teresa, the Roman Catholic nun who spent much of her life giving aid to India’s poor, was declared a saint on Sunday in a canonization Mass led by Pope Francis, 19 years after her death. Applause broke out from the tens of thousands in attendance even before Pope Francis finished the canonization at the start of Mass. 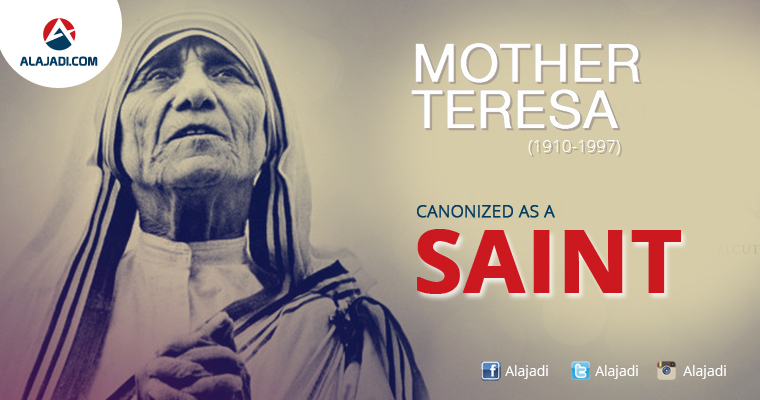 India renamed the city of Calcutta to Kolkata in 2001 to match the Bengali pronunciation. But the church uses the spelling of Calcutta in its references to Mother Teresa. The canonization ceremony took place under a broiling sun before a crowd of 120,000 in St. Peter’s Square, according to Vatican estimates. Behind the pope, on the facade of St. Peter’s Basilica, hung a banner-size portrait of Mother Teresa, one of the late 20th century’s most recognizable faces.

Saint Teresa died on Sept. 5, 1997, at age 87, with a lengthy list of humanitarian accomplishments to her name. Notably, she founded the Missionaries of Charity, a global congregation that provides aid to the the poor, infirm and homeless. She also won the Nobel Peace Prize in 1979, in recognition of her efforts.
Mother Teresa’s statue is being installed here to celebrate her sainthood, she thought it was a call from Lord Jesus to take care of the people. A saint doesn’t belong to one religion, a saint belongs to humanity, belongs to everyone.

Criticism comes with the territory of celebrity, of course. And plenty of people disagree with Hitchens. Many of them expressed their admiration for Mother Teresa Sunday on social media.