Meelo Evaru Koteswarudu has been creating a good buzz off late with its unique trailers. Starring 30 years Pruthvi as the main lead, this film has hit the screens today.  Film is Directed by E. Sathibabu, the movie is being produced by K K Radha Mohan. The makers released the Meelo Evaru Koteeswarudu Trailer Few Days Back, and it was hilarious. The trailer has a lot of comedy punches, and comedian Prudhvi is the center of attraction in trailer. 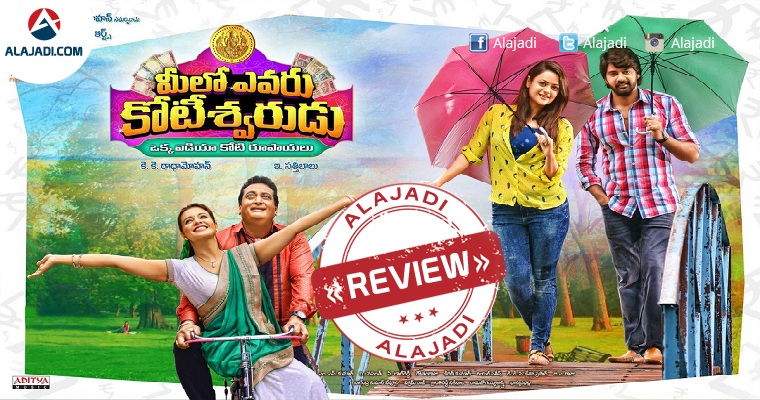 Naveen Chandra is a young youth who falls in love with a rich girl played by Shruti Sodhi. As expected, Shruthi’s father(Murali Sharma) does not approve of her love affair and insults Naveen Chandra. This is also the time when Naveen starts an argument saying that one needs only genuine happiness in life and as a rich businessman, he will never understand that.

Upset by this, Murali Sharma decides to experience how can one get true happiness. With an idea from one of the top producers(Posani), he decides to make a flop film so that he can loose all his money at once and get back on top once again after working hard. For this, he chooses Variations star(Prithvi) as a hero. Rest of the story is as to what kind of problems the film gets into after the entrance of a funny character like Prithvi.

Meelo Evaru Koteswarudu is a loud entertainer which is not everyone’s cup of tea. The film is clearly aimed at the single screen B and C center audience who do not mind over the top comedy. If you like Prithvi and his style of spoofing other stars and are ready bear him for the entire duration of a film, you can give this film a shot. But for the rest, there are so many other options that you can explore this weekend.

Production values are quite good as the film has some very good visuals. Thankfully, the film does not have many songs. Background score is just about okay. Dialogues are quite fun and have been written well. Editing is average as a song and some routine scenes could have been easily chopped off in the second half. Coming to the director Satti Babu, his basic idea of making Pruthivi the central character and getting him to do spoof comedy in interesting. But sadly, he makes things go haywire as he drags what can be said as a small comedy track into an entire film. His idea of showing a film within a film also is quite disappointing and can irritate many.