The man behind the leaking of the footage of the crucial war sequence in Baahubali 2 has reportedly been arrested. He is found to be graphic designer Krishna, who works as an editor in the graphics department in Nagarjuna’s Annapurna Studios. It is reported that he had shared the nine-minute video footage to one of his friends in Vijayawada and it got leaked on net subsequently. 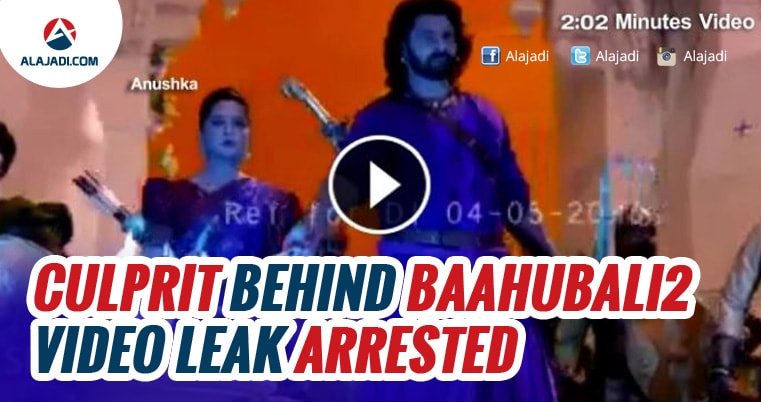 S.S.Rajamouli‘s prestigious project Baahubali is being made by with a whopping budget of approximately 200 crore rupees. Baahubali: The Conclusion is the most anticipated movie of 2017. Despite safeguarding the secrecy of the story, the mishap took place when Krishna Dayanand, a trainee in graphic designing at Annapurna Studios stole the nine-minute footage from the workplace by logging into the server.

On Tuesday evening, producer Y Shobhanadri, lodged a complaint alleging that he saw video clippings of Baahubali-2 footage on YouTube and asked his team to find out how it happened. After looking at the five minute video footage being streamed on YouTube, the producer realized that it could have only been stolen from Annapurna Studios, where the footage was given for design work.

Culprit Krishna is a native of Sathupalli, a town in Khammam district. The team rushed to Krishna Dayanand’s house in Tolichowki on Tuesday morning and in Krishna’s presence, checked his computer. Subsequently, Krishna confessed to have shared the video clippings with two of his friends, Aishwarya and Akhil of Vijayawada on Monday night through whats app.

The video clippings in Krishna’s desktop and the video clippings sent to his phone by his two friends from Vijayawada are of the same duration and have same audio visual content. After sending the clippings, Krishna deleted the content from his phone, the ACP said.

Based on his complaint, police registered a case against Krishna under sections 43 (b), 66 of the IT Act and section 63 of the Copyright Act. Police said they will be writing to YouTube to block Baahubali-2 footage being streamed online. We will also ask for the IP address and account details of the video uploader, the ACP said.