A 45-year-old farmer in Ludhiana moved court to seek compensation due for his land acquired by Northern Railways. What he got on Wednesday is the Swarna Shatabdi Express train that runs between Amritsar and New Delhi. Sampuran Singh would be one of the very few people who can take pride in being an Express train owner. The Punjab farmer in an astonishing conclusion was awarded a train by the court in the battle for proper compensation for land seized to build a Ludhiana-Chandigarh railway line. 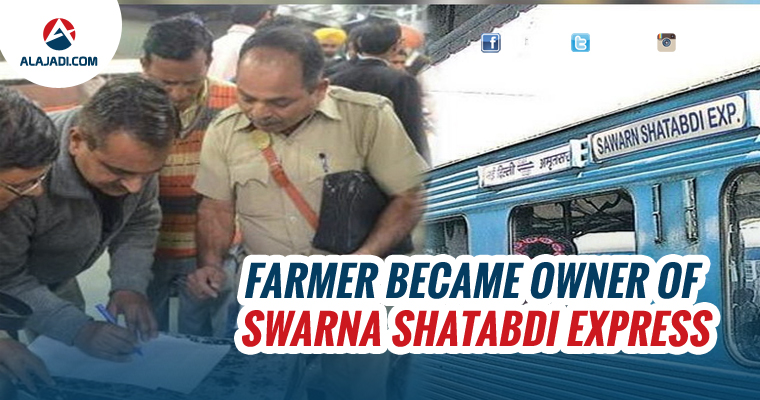 The government needed to pay Singh Rs. 1.47 crore as compensation. However, for some reason, the government could pay him only Rs. 42 lakhs. Thereafter, Singh filed a petition in 2012 only to be heard in 2015. The court ordered for his compensation to be released but again, the order didn’t materialize. Hence, he filed another petition seeking the execution of the court’s order. Hence, the court of additional district and sessions judge, Jaspal Verma, delivered a sentence that is beyond our comprehension.

The court of Additional District And Sessions Judge Jaspal Verma attached the train (number 12030) at the Ludhiana station. He ordered the Swarna Shatabdi Express train to be given to the aggrieved farmer. In order to fulfill the formalities, Singh and his lawyer, Rakesh Gandhi, reached the station one hour ahead of the train’s arrival as Singh did not want to “cause a lot of trouble” to the passengers by stopping the train for a more than required time. They subsequently handed the court orders over to the train driver.

Railway officials later secured an interim court order giving them control of the train until the case is heard again. “If they fail to pay the money by Saturday then the court can sanction an auction,” Gandhi said of the 20-coach express train, which runs daily between New Delhi and the Sikh holy city of Amritsar in Punjab.
About the court attachment of the train, divisional railway manager Anuj Parkash said there was “some issue relating to compensation amount to a farmer which is being sorted out”. He added that such orders are being examined by the law ministry. “What will the petitioner do with the 300-meter train? Can he take it home?” he asked rhetorically.