Khaidi No 150 Review and Rating

Khaidi No. 150 is Indian Telugu-language action drama film directed by V. V. Vinayak, and written by AR Murugadoss. The film features Chiranjeevi in a dual role, Kajal Agarwal in the lead role and marks as the former’s comeback to acting after 10 years in his 150th film. It is a remake of the Tamil film Kaththi(2014). 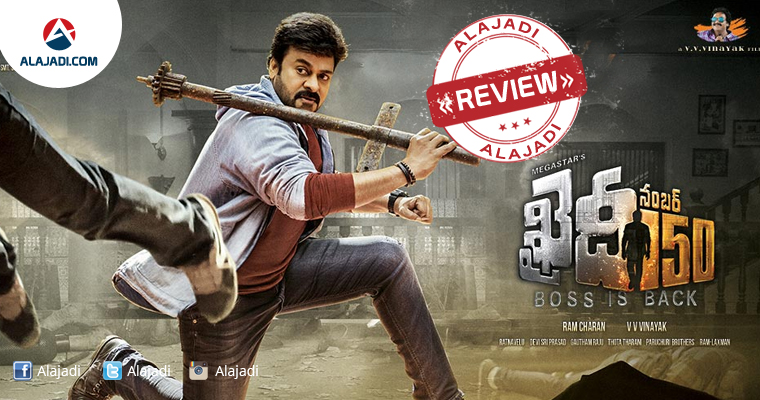 Kaththi Seenu (Chiranjeevi) is a happy go lucky crook who escapes from jail and plans to leave the country for good. One fine day, he comes across an accident and helps the man who gets affected by it. The twist in the tale arises when Seenu finds out that the man(Shankar) he saved is the exact look a like of him. He cleverly sends back Shankar to jail in his place and silently enters his life to earn more money. Who is Shankar? What is his story? How Kaththi Seenu fights Shankar’s issues? form the rest of the story.

Khaidi No 150 is a typical mass entertainer. The film is set to take record openings and has everything that we expect from a star hero like Chiranjeevi. The competition is huge but being a Chiru project there is a slight advantage as the fans of the mega family are gearing up in huge numbers and have taken upon themselves to promote the film. One of the Best Movie of Mega Star. Chiru’s one man show, superb songs, and a good message makes this film a good watch this festival season.

Megastar Chiranjeevi: He is fabulous with his expressions and superb with his dances for his age. He looks dazzling like never before which enhanced his screen presence more.

Kajal Agarwal: She performed well and is glamour-or.

Tarun Arora as a corporate company heir is appealing and has given nice performance. Brahmanandam, Raghu Babu and Prudhvi generate few laughs in between the proceedings of the movie. Ali is at his witty best as an aid to Chiranjeevi. Posani is apt as well as other actors.

Story written by A R Murugadoss is superb and already proven its caliber. Screenplay is good and dialogues are well written except for some forced comedy scenes. Devi rocks big time with his music. The icing on the cake is his background score which elevates the film to a decent level. Special credit should go to DOP Ratnavelu for capturing Chiru in a stunning way and makes you go in disbelief that Chiru is actually a 60-year actor. Dialogues by Sai Madhav Burra are massy.