Jyo Achyutananda Theatrical Trailer Is Out !

Young actor turned to director Srinivas Avasarala scored a decent hit with his debut Oohalu Gusagusaladey, which is Telugu romantic comedy movie. It has been a while, he directed a film and after a decent gap, he is back with his second directorial movie is Jyo Achyutananda. 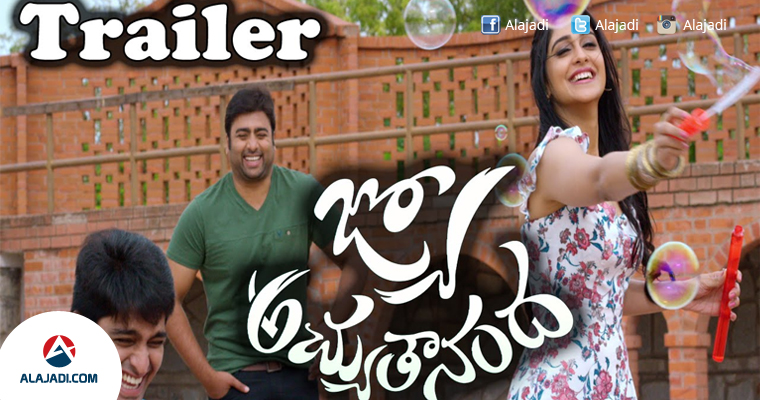 The movie has been raising everyone’s eyebrows because of the cast. Nara Rohit, Naga Shourya and Regina Cassandra played the lead roles in the film which is said to be a romantic entertainer. The entire shoot of the film has been wrapped up and the makers unveiled the audio along with the theatrical trailer. The entire trailer has been completely refreshing, interesting and entertaining. This movie  is a clean triangular love story which has its moments throughout. The film has an interesting twist which has been keeping under the wraps.

How can we miss the magic of the director who came silently with the movie Oohalu gusagusalade and made every one surprised.Theatrical trailer of this film is superb with funny moments, beautiful dialogue and colorful visuals. Avasarala has once again come up with a triangular romantic comedy with class appeal. This is the love story of two brothers (Achyuth and Anand) who fall in love with the same girl (Jyo). Audio Launch is happened on Aug 21st at JRC Hyderabad. The music for the movie is given by Kalyan Ramana. Sai Korrapati under Vaaraahi Chalana Chitram banner is producing the movie.

The Album is a fresh mix of songs that include Classical to Modern numbers, Peppy numbers to Soothing songs. So wait for the magic of Kalyan Ramana and the taste of Avasarala Srinivas spell bound you with their beautiful album. Seems like Avasarala will get a hit again with the present movie. Wishing him all the best for future projects.