The wait is over for all the fans and Telugu movie audience and here we go with the ‘ Janatha Garage Review ‘  exclusively for you with the complete movie details along with Janatha Garage rating and the movie story updated. The most anticipated bilingual movie Janatha Garage (made in Malayalam as well with same title) directed by Koratala Shiva featuring Young Tiger Jr. NTR, Malayalam Superstar Mohan Lal, Samantha Ruth Prabhu and Nitya Menon under huge expectations. 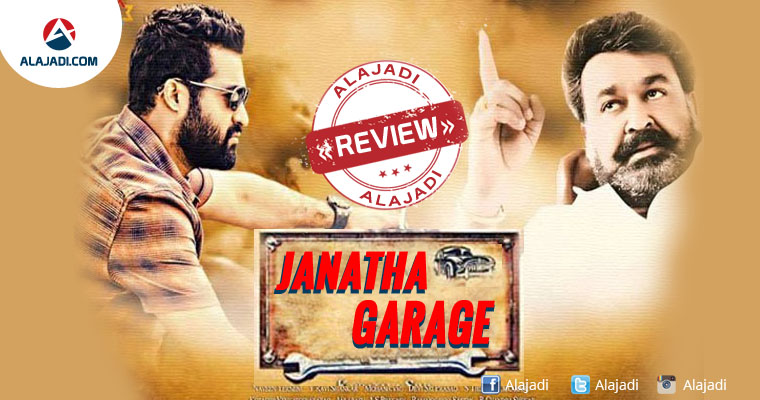 The plot is simple. Junior NTR (Anand) is an earth activist and he is some one who protects Mother Nature. He wants everyone to plant as much as possible to protect Mother earth. At one stage he is forced to lock horns with Mohanlal who is a mechanic and he holds a contrasting character to Junior NTR. Twist to the tale arises, when things get unfolded as who is Mohanlal and what he actually was earlier. Anand who is socially responsible tackles all the mess and walks out for ‘A happily ever after’ climax.  Jr NTR tries to find out the strong reason behind Mohan Lal’s silence after knowing his past as a don. How does Jr NTR gets to know the reason? How does he win over the mining mafia? What are the hurdles during the struggle for justice? Is the remaining crux of the story.

Janatha Garage has everything which NTR fans can eagerly look forward to. NTR’s stylish look and super strong characterization are major assets of the film. The movie has also some power-packed action performances which are sure to thrill the audience. Kajal who appears just for one song has stole audience hearts. Her glamour and tarak’s energetic dance steps is a pure feast for our eyes !

Jr NTR: His acting is simply superb.  He is already a proven actor and dancer and he aced the character in the movie.

Mohanlal:  He just nailed it. Characterization of Mohan Lal has been so intense and catchy and even the audience received it so well.

Samantha: She might get a place as she has shown some glamour. Nothing more to brag about.

Nithya Menen:  She have done justice to her role.

Other characters in this movie are good did a decent job.

Cinematography by Tirru deserves special mention and he is sure to stay in Tollywood for a while. The visuals and angles are quite creative. Not only the direction part but also the screenplay, story and dialogues were done by Koratala himself. Rockstar DSP’s music rocked and thrilled the audience.