Senior political satirist Srinivasa Iyer Ramaswamy, popularly known as Cho Ramaswamy, died in Chennai on Wednesday morning following a cardiac arrest. He was 82. Cho was a nominated member of the Rajya Sabha from 1999 to 2005. A former BJP Rajya Sabha member, Mr Ramaswamy was ailing for some time and was in the hospital. 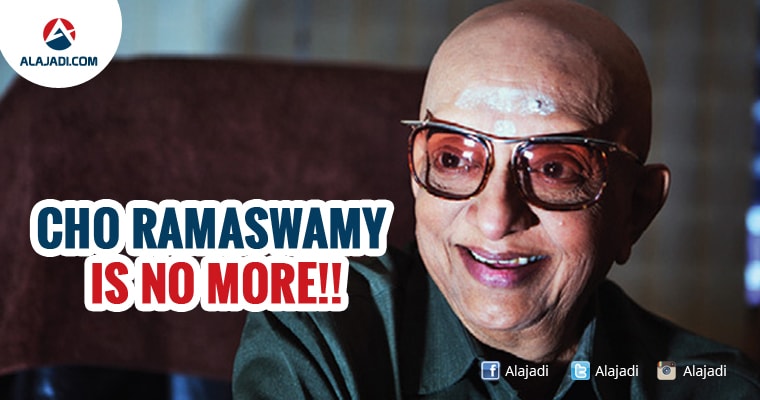 He founded and edited the political magazine Thuglak and was fearless in criticising the ruling government in the state or at the centre. Mr Ramaswamy had personal rapport with many politicians in the country. Late Tamil Nadu Chief Minister J Jayalalithaa was a good friend of Mr Ramaswamy and used to seek his views.

A multi-faceted personality Mr Ramaswamy was also a play writer and a stage actor. He has also directed several movies and was also a screen play writer. Mr Ramaswamy has acted in movies along with MG Ramachandran, Sivaji Ganesan, Jayalalithaa, Kamal Hassan, Rajinikanth and others. He has written, directed and acted in over 20 Tamil plays which were performed over 5,000 times, acted in 180 movies scripted 14 movies, directed four films.

Cho launched Tamil magazine Thuglak on January 14, 10 1970. He considered the magazine a government critic and a responsible opposition. Every year, on January 14, he held a public meeting to meet his readers and honour staff of the magazine. Senior leaders also attended the annual meeting.