Jayammu Nischayammu Raa is the latest movie which has an interesting story line with Desi Entertainment. Shiva Raj Kanumuri is debuting as a director, and is producing it with Satish Kanumuri jointly. Srinivas Reddy and Poorna are playing the lead roles. 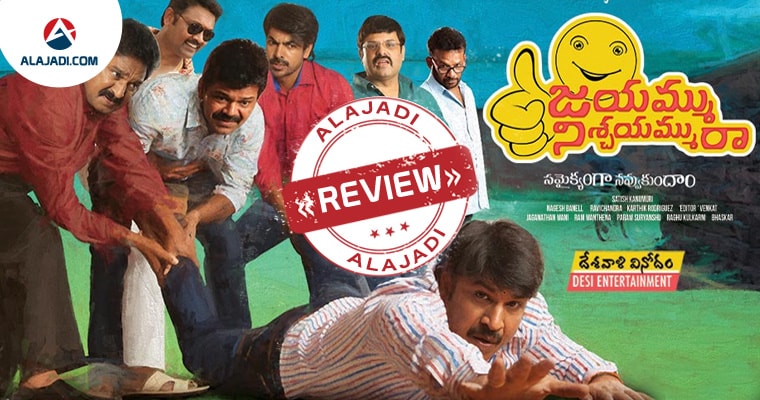 Sarvam (Srinivas Reddy), who is a country lad struggling to get a job. Sarvamangalam always believes superstitions and thinks that his success is not because of hard work and it is only due to the superstitions he is following. He lives life as it comes until he lands a government job and falls in love with Rani (Poorna). He tries to impress Rani but faces trouble from various quarters like his boss (Ravi Varma) and also charming youngster (Sree Vishnu). To find out whether Sarvamangalam’s superstitions help him fulfill his dreams, watch Jayammu Nischayammu Raa on big screen.

Jayammu Nischayammu Ra is an honest tale of Love, Life, and Victory. The film has so many interesting elements that would work well at the box office. Srinivas Reddy’s performance as an innocent, Poorna’s traditional Andhra look and some comedy elements make this film a decent time pass entertainer. If you are okay all these things, you can easily give this small town love story a shot which has some interesting moments.

Srinivas Reddy: He has shown each and every emotion perfectly and registers every variation of his character. Simply he is the show stealer.

Poorna: Her performance is also up to the mark.

Comedians like Krishna Bhagavan, Praveen, Jogi Brothers did well. Ravi Varma impresses in the antagonist role. Sree Vishnu character is entertaining. The rest of the actors made their presence felt.

Production values are amazing in the film. The native atmosphere, government office set up have been created in a wonderful way. Music by Ravi Chandra is impressive. The song O Rangula Chilaka is one of the major highlights of the film. Dialogues are decent and so was background score. Cinematography by Nagesh Banell is superb. The visuals are great. Editing by Venkat is okay.