Why was Jayalalithaa buried, not cremated?

Actress turned Politician, Jayalalitha dead after fighting with death for almost 2 and half months. There was much anticipation that Amma will be discharged from hospital after she gets the treatment. But after being admitted in Apollo Hospital on Septmeber 22, she never returned back. No one didn’t show anything and never let anyone knew about what is happening in the hospital. Finally the fight came to an end on December 5th where the death won against Tamil Nadu Chief Minister. On Monday, Jayalalithaa continued to be very critical and was on extra corporeal membrane oxygenation (ECMO) and life support systems. 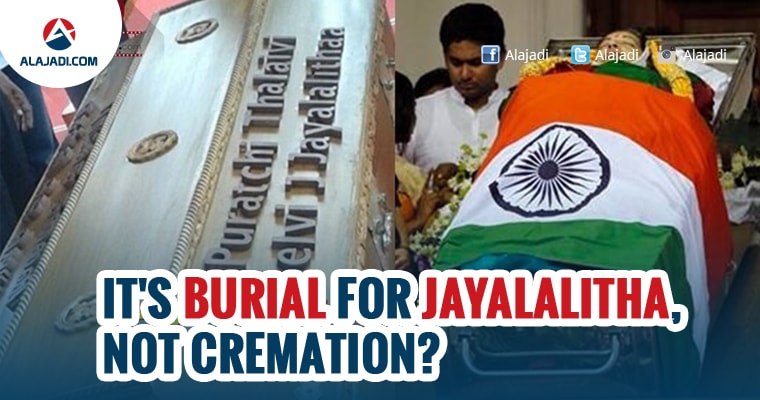 Unlike other Dravidian leaders, J Jayalalithaa was a believer who used to pray regularly and be seen with an Iyengar Namam on her forehead. Still, why did the state government and the Sasikala family decide to bury her instead of a cremation an obvious ritual for Iyengars.

The burial, rather than cremation, of J Jayalalithaa on Tuesday alongside the memorial of her mentor and former Tamil Nadu chief minister MG Ramachandran on Marina Beach, generated curiosity. Custom dictates that a Tamil Brahmin, whether Iyer or Iyengar has to be cremated after death.

Two reasons are being cited for the burial: tradition and politics.

In Dravidian culture and tradition, Brahmin rituals are a strict no, and people don’t care for gods and similar symbols. That’s why Dravidian leaders don’t attach much importance to such rituals, said Prof Aarasu of the Tamil department in Madras University.

Jayalalithaa might be a Brahmin and also a staunch believer of Hindu religious rituals, but she was the leader of a Dravidian party which is closely associated with the Periyar movement that was anti-Brahminical in nature, the expert said.

Besides, another reason could be playing its part too. There are memorials for MGR and Anna Durai on Marina Beach and the party would like to erect a monument in Jayalalithaa’s memory as well.