Janatha Garage movie shooting is going on very faster and movie maker was planning to organize the audio launch of the event very sooner. But according to the latest reports the makers had planned to launch the audio first in New Jersey USA and also not to disappoint the fans of Hyderabad the makers will again plan the audio launch in the Hyderabad at Shilpakala Vedhika on August 12th 2016 and audio launch event will start at 06: 30 PM. And Janatha Garage is said to be a mass entertainer with right commercial touch. 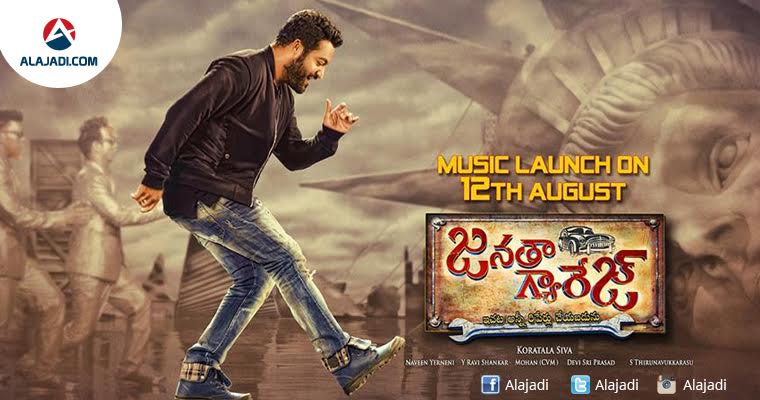 The highlight of the film is the Kannada senior actor Mohan Lal will be seen in the Janatha Garage movie. In the female lead, the actress Samantha Ruth Prabhu and Nitya Menon in the movie. Other actors who were sharing the screen place are Sai Kumar, Devayani, Unni Mukundan, Sitara, Brahmaji, Ajay, and others. Janatha Garage movie is directed by Koratala Shiva. Devi Sri Prasad has composed the music.

Jr NTR fans were waiting eagerly for the release of the movie Janatha Garage and for the audio launch event. Mythri Movie Makers are bankrolling Janatha Garage which will hit the screens on September 2nd in Telugu and Malayalam. The pre-release business has already started hugely and the trailer which impressed the audience is still going viral on YouTube.

Lahari Music ‏has acquired its rights and it is bringing the CDs and cassettes of its audio album to the market.