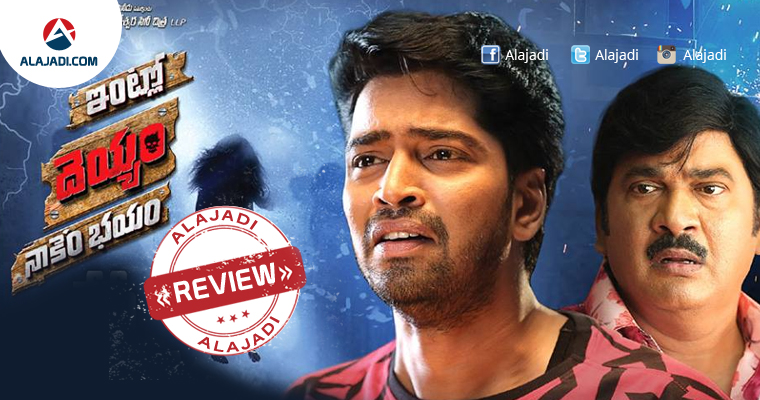 Tollywood Comedy King Allari Naresh’s latest flick Intlo Deyyam Nakem Bhayam Movie at last released on December 30 as New year special treat to Telugu audience. Initially, The film is slated to release on December 11 but postponed due to Demonetization of 500 and 1000 rupee note by Government. After the long gap, makers released the film on Friday.

Naresh (Allari Naresh) is member of band troupe along with his friends Shakalaka Shankar and Chammak Chandra. He loves Bhanumathi (Kruthika Jayakumar) at first sight and tries to make her fall in love. She runs a orphanage home. During the process of wooing her, he comes across a situation where a small child from her orphanage is to be operated for a hole in her heart and it requires a lot of money. Naresh pledges to get her operation done with his money and borrows it from a loan shark and it is robbed by unknown person. They get a call from rich businessman (Rajendra Prasad) whose newly bought house is haunted by a ghost to solve the problem of ghost. He agree to do that as he is in need of money. What happens after that forms the rest of the story?

Intlo Deyyam Nakem Bhayam is another one in this genre and it begins with a haunted house and followed by scenes which are meant to generate comedy but fails where hero tries to make heroine fall for him as he loved her at first sight. This half ends where Naresh owes to get the ghost out of house. It doesn’t create any interest and second half can only be seen expecting some laughs as it has no story. The comedy written in the second half is pale and even Brahmanandam is not able to save this half who makes entry as a cop.

Allari Naresh: He tried his level best to evoke laughs with his mannerisms and his timing but failed miserably.

Kruthika Jayakuma: She is okay and she gets a character which we have been seeing from the era of  the director Raghavendra Rao.

Shakalaka Shankar and Chammak Chandra are good and do not add much to the movie. Gemini Kiran is nice in his small role. Rajendra Prasad is nice. Chalapathi Rao, Pragathi and Sri Vidya are good. Brahmanandam as a cop fails to generate comedy. Kalakeya Prabhakar is good. Other actors are fine in their roles.

Songs composed by Sai Karthik are just okay and there is not even a single song that can be remembered after the movie. Background score is something which we are hearing in many movies and Sai Karthik has done a very bad job in this movie. Cinematography is good. Editing is mediocre and it could have been much better. Production values are rich.