India and Pakistan have fought two of their three wars since independence from Britain in 1947 over Kashmir, which is divided between them. Both claim the former princely state in full.

In one of the worst casualties suffered by the Indian Army in recent times, a fidayeen attack left at least 17 soldiers dead at the rear base of an infantry regiment in Uri. The early morning attack on Sunday was carried out by four terrorists, all of who were neutralized. Militants attacked Army headquarters in Uri in Jammu and Kashmir around 5:30 am. 17 Army personnel killed and 30 injured in the attack. Heavy casualties occurred because tents and temporary shelters with troops caught fire. 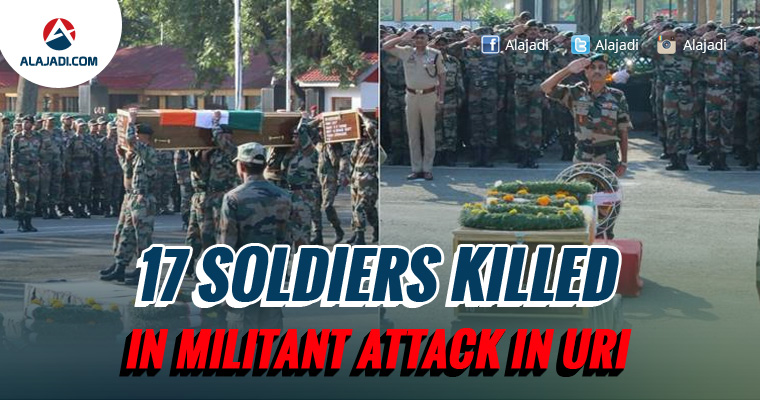 The map retrieved from the terrorists revealed that they were to kill unarmed troops, then storm a medical aid unit near the brigade administrative block and blow themselves up in the officers’ mess. the suicide squad attacked the administrative block where unarmed soldiers were refilling diesel in barrels from fuel tanks. The terrorists lobbed 17 grenades in three minutes, which ignited the dump and resulted in a massive fire burning barracks and tents in a 150-meter radius. Thirteen soldiers were burnt alive instantaneously and 32 soldiers were critically injured with severe burns.

The initial investigations by the Army indicated the role of Jaish-e-Mohammed in the attack with weapons recovered from the slain terrorists having Pakistan marking.

With the diesel dump ablaze, due to smog and subsequent explosions, the terrorists got disoriented and headed straight towards soldiers’ barracks. One terrorist was gunned down in the barracks by a 19-year-old Dogra soldier, who, while challenging the other three, sustained a severe head injury when a bullet hit his helmet. Since the barracks were vacant, the terrorists took a defensive position in the side barracks of two floors and 16 rooms. Later, four commandos stormed the building and eliminated the other three terrorists.