Hyd: 12-year-old boy takes upon himself to fill potholes

Chinnari’s death in a borewell near Chevella in Ranga Reddy district sent shock waves but it has moved a 12-year-old to take matters into his own hands. Even as the GHMC remained unmoved, Ravi Teja, a student of a government school, was seen at Habsiguda main road on Monday afternoon, collecting gravel and filling up potholes.

Ravi Teja who passed his Class 5 said he would be joining a residential school in Ghatkesar. Ravi Teja said he had gone to work on the potholes without anyone’s direction or advice. He worked for hours, unmindful of the traffic and the pollution. 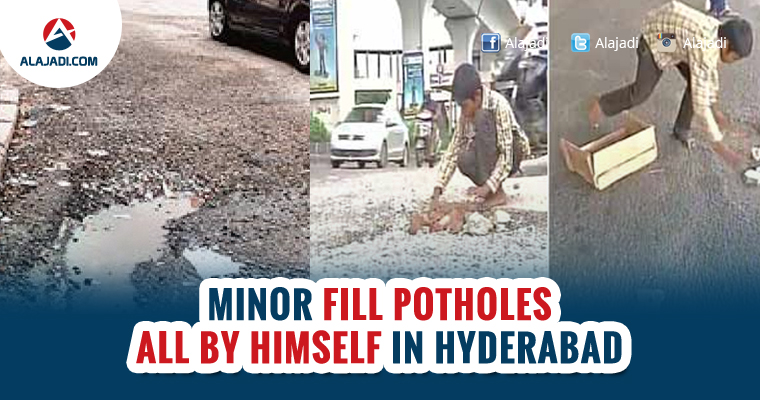 When this reporter called Ravi Teja, he said, “I cannot forget how Chinnari fell into the borewell and died. Every time I travel I see commuters trying to negotiate their way past potholes. I have seen many people fall. I don’t want anyone to die this way. Monday was the first day that I attempted this, I will continue to fill potholes,” he said.

Asked him the speeding vehicles were not a concern, he said, “No.” Ravi Teja said he would get his friends to join him in his effort. The images of the little boy filling up the roads forced the authorities to take cognizance of the sorry state of the city’s roads.