Author: Sarika G
In a key judgement by the Delhi High Court on 3 July, any slurs directed towards Scheduled Castes and Scheduled Tribes on social media, would be treated as a punishable offence even if it has been made in a closed group. The Scheduled Castes & Scheduled Tribes (Prevention of Atrocities) Act, 1989 will apply to any cases where a casteist slur has been made against a person hailing from that community. It will entail imprisonment and (or) imposition of fines on the offender. The judgement mentioned above came about a post on a Facebook ‘wall’, but the ruling can also be used in the cases of other social media platforms which have closed privacy settings, like WhatsApp. Justice Vipin Sanghi was heading the bench that ruled on a case filed by an SC woman (petitioner) against her Rajput sister-in-law (respondent) for allegedly making casteist comments on social against the complainant’s community.Defending her actions, the Rajput woman said that her Facebook posts, even if true, have been posted on her own Facebook wall and do not intend to insult or humiliate any individual. 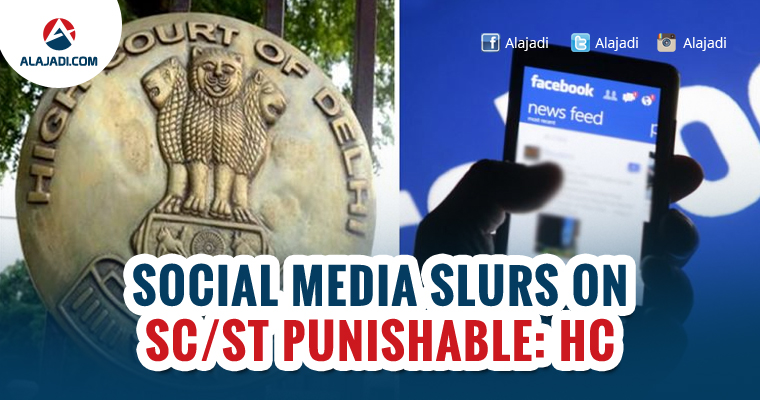 Additional standing counsel Nandita Rao, however, told the court that offence under the SC/ST Act is made out, as the posts made by the respondent on her Facebook wall were intended to attack her petitioner who belongs to the ‘Dhobi’ community.The respondent argued that her posts never named her sister-in-law or co-sister, and were directed against the females of the ‘Dhobi’ community in general, and not against any particular individual. Thus, it is baseless of the petitioner to take offence.In the end, the Rajput woman also said her Facebook wall is a private space, and no one has a right to snoop around only to get offended on reading the posts uploaded. This was, nevertheless, ruled out by Justice Sanghi, pointing out that the accused Facebook wall was under of public viewership.
The judgement read, “When a member registered with Facebook changes the privacy settings to ‘public’ from ‘private’, it makes his/her writings on the ‘wall’ accessible not only to the other members who are befriended by the author of the writings on the “wall”, but also by any other member registered with Facebook. However, even if privacy settings are retained by a Facebook member as “private”, making of an offending post by the member – which falls foul of Section under Section 3(1)(x) of the SC/ST Act—may still be punishable.”The judgement, however, clearly said that there would be no prosecution if the complainant and the offender on the social media platform are related to each other. The ruling opined that “public view” refers to “a place where public persons are present – howsoever small in number they may be.” It also pointed out that the insult or humiliation does not need to be done in the presence of the said member according to the sections of SC/ST Act – the action would remain culpable under the law.

“Keeping this in view, looking to the aims and objects of the Act, the expression “public view” in Section 3(i)(x) of the Act has to be interpreted to mean that the public persons present, (howsoever small number it may be), should be independent and impartial and not interested in any of the parties. In other words, persons having any kind of close relationship or association with the complainant, would necessarily get excluded,” said the judgement.Therefore, the FIR lodged by the petitioner was quashed by the HC, but the court clarified that if the offensive comments have been directed at a community in general and not to a particular person, the ruling will not stand in that case.