Macho action hero Gopichand and hat trick director Sampath Nandi’s stylish entertainer Goutham Nanda is all set for a grand release on July 28th. Produced by J Bhagawan and J Pulla Rao of Sri Balaji Cine Media banner, Goutham Nanda is made on a lavish budget with extra ordinary technical standards. Glamorous Hansika Motwani and ravishing Catherine Tresa played heroines besides Gopichand. He played strong villain roles in movies like Varsham and Jayam. He again came back to being a hero and now, in Goutham Nanda, he has a makeover. 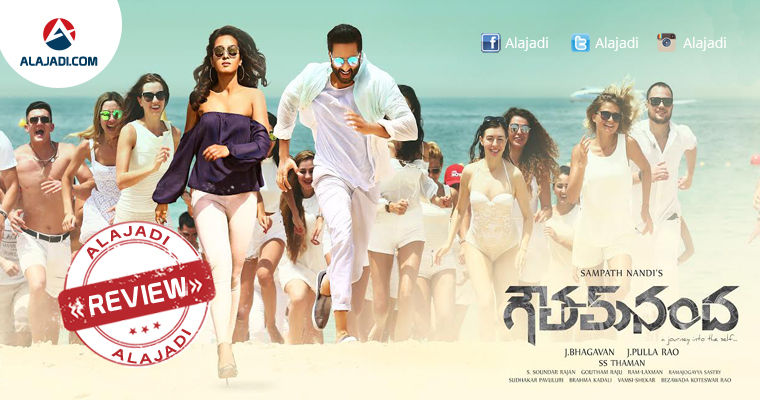 Goutham Nanda is a movie that is based on the thirst for money and what it can do to people. Everybody, everywhere in the world are connected by a single factor, money. The tag-line that comes along with title Goutham Nanda is ‘A journey into the self.’ The movie kick starts with Gopichand’s stylish intro and he looks stunning. He is introduced as the son of a rich businessman, a party freak and an alcoholic. The introduction of few other characters follows. Catherine Tresa makes an entry along with Tanikella Bharani. After an interesting conversation, we see a twist in the tale with variations in Gopichand’s character. We then witness the slum lifestyle. Hansika Motwani is a bubbly girl from a basthi in Hyderabad. Naturally, there is a fight scene between Gopichand and a guy who misbehaves with Hansika. This fight, obviously leads to a mass song between the lead pair. After a few emotional family scenes post the song, the scene shifts to Bangalore. At this point, there is another twist in the story post which the hero meets with an accident.

The hero turns out to be fine and the scene again shifts to Hyderabad. Gopichand depicts multiple shades in his character after which some interesting facts about the hero are revealed. Gopichand, being Hansika’s saviour, once again, fights off some rowdies who are teasing her. He then finds out who is behind the accident and a lot of mysteries unfold at this point, leading to another twist in the tale. Catherine Tresa makes a re-entry and her role here is very crucial. As usual, there is a fight between the hero and villain towards the end. However, there is a surprise awaiting and to know that, you need the catch the movie on the big screen.

Gopichand’s makeover did complete justice and he looks stunning in the new and stylish avatar! Action and fight scenes are also shot very well and comedians did not fail to entertain us. Though the movie might seem confusing in a few places, everything falls in place once the second the mystery unfolds. Songs or background music in the movie did justice to the scenes. While Catherine plays a stunning and glamorous role, Hansika on the other hand plays a cute girl-next-door role. The chemistry between the actors worked out really well. Gopichand’s acting is on point, making Goutham Nanda his comeback movie. There are two twists in just the first half making the audience sit on the edge of their seats. Overall, Sampath Nandi did a very good job with the characterisation or the story.

Hansika and Catherine Tresa: They has also given their best performances in this movie.

All other cast ans crew did justice to their respective roles.

It is the first combination of hero Gopichand with the director Sampath Nandi. Even Director also took one year gap after his last venture Bengal Tiger with Ravi Teja.  S. Soundar Rajan is the cinematographer. Goutham Raju is the editor and Ram-Laxman have composed the stunts. The music composed by S. Thaman and All song Lyrics are penned by Ramajogayya Sastry. Recently, Film has finished censor formalities and received U/A certification from the censor board. Goutham Nanda runtime is locked at 2 hours 30 minutes. According to the latest update, The film raked  32 crores with his satellite, theatrical rights, dubbing rights and other digital rights. Recently, Popular producer and distributor Dil Raju has raked the theatrical rights of Goutham Nanda for Nizam area for the record price of Rs 6.30 Cr. This is the first film of Gopichand which fetched this whopping prices compared to his past films.