The first thing that strikes you when you see the trailer is that the film promises to be a visual extravaganza unparalleled in the history of Telugu cinema. The film itself could be an experience that could transport you back to the times of Satakarni. Every single frame in the trailer spells class, grandeur and authenticity. The battle scenes in any historical film are the most critical scenes – which either make or break the film and the director’s reputation. But director Krish gives us hopes of spectacular battle scenes. The shots of Balayya at the head of an army are stunning. The long shots of the huge armies are stunning. The brief shot of a fleet of ships raises hopes of a well pictured naval battle. There are several shots of a sword wielding hero which only raise hopes of the fight sequences being par excellence. There are several shots of hordes of horsemen riding into battle which make for stunning visuals. 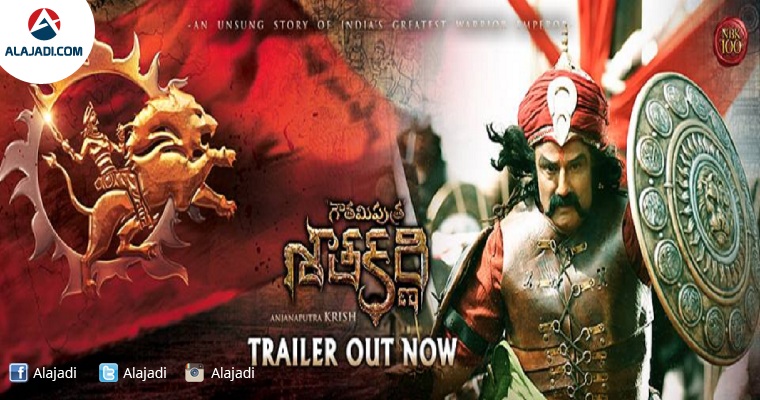 The other important aspect of any historical film is its authenticity. The sets and locations should convey this authenticity as should the story, screenplay and dialogues. The trailer makes it more than evident that Krish has not failed in bringing out that authenticity. Whether it is the palace scenes or the battlefield locations, Krish has breathed life into each shot. There is a brief shot of a European army which looks every inch a European army. The costumes of the European king also help to create the authentic atmosphere.

The trailer begins with dialogues of Satakarni warning his enemies to become his vassals or face the consequences. There are other dialogues of the king exhorting his people to face the enemy. These dialogues exude punch and energy so typical of Balayya. Right through the trailer Balayya’s energy and dynamism are palpable – traits that perfectly suit the portrayal of a very fiery king.

Shreya Saran looks gorgeous and every inch the young queen. The trailer is interspersed with romantic scenes between Balayya and Shreya which not only show her in stunning beauty but also display the softer side of an otherwise fiery king. There are indications of an emotional conflict between the queen and king.
Hema Malini as the queen mother exudes grace and charm and majesty. She seems to be a perfect choice for the role. Her dialogues clearly bring out how proud she is of her son.

There is a mysterious warrior woman who is shown in war and also romancing Balayya. This adds a flavour of mystery to the story. The trailer is definitely one of the best that Tollywood has seen. It is a sure indication of the quality of the film without actually revealing the story. Hats off to Krish and team for putting together such a trailer. One cannot wait to see the final product.