The much awaited Forbes’ list of highest paid actors in the world is out now, and it’s a good news for Bollywood fans. While Mark Wahlberg has topped the list this year, three Indian actors find place in the top 10. While Shah Rukh Khan is at number 8, Salman Khan and Akshay Kumar follow at number 9 and 10 respectively. According to Forbes, while SRK earned $38 million (Rs 243.50 cr), Salman made $37 million (Rs 237 cr) and Akshay took home $35.5 million (Rs 227.5 cr).

These three actors were expected to be in the list as they are the highest earners in the world’s biggest film industry in terms of numbers of films produced every year. However, Aamir Khan’s absence from the list is surprising whose Dangal has broken the worldwide collection records for any Indian film. It collected over Rs 2000 cr ($312 million) in China alone. 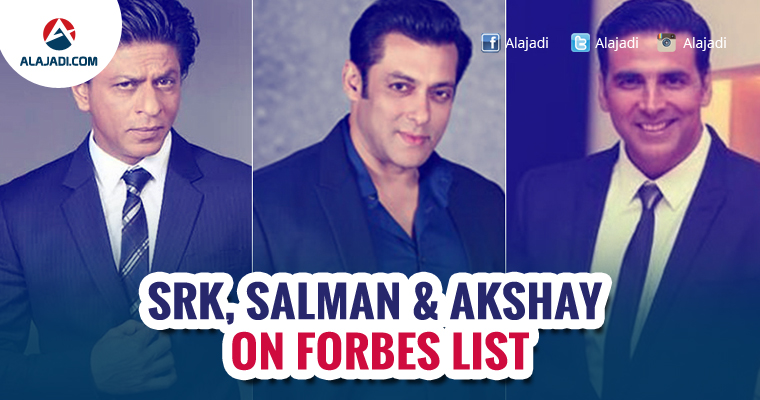 The magazine says it has collected the data over a period of 12 months starting from June 1, 2016. Dangal released on December 23, 2016 and most of its earning came within the specified period. Mark Wahlberg is surprisingly the highest earning actor in the world with $68 million kitty. That’s almost 79% more income than Shah Rukh Khan. Wahlberg, 46, made to the top thanks to his pay days for movies Daddy’s Home 2 and Transformers: The Last Knight, according to the Forbes ranking released on Tuesday.

Forbes attributed the disparity to the prevalence of superhero and action blockbusters that earn big at the box office for Hollywood studios but tend to have fewer leading roles for women. Pirates of the Caribbean star Johnny Depp, who for years has been among the top five paid actors, did not make the top 20 this year, Forbes said. Depp is currently embroiled in a bitter lawsuit with his former business managers who have detailed what they describe as his lavish spending habits. Vin Diesel ($54.5 million), Adam Sandler ($50.5 million) and Jackie Chan ($49 million) were adjudged 3rd, 4th and 5th on this list. Iron Man star Robert Downey Jr and Tom Cruise came 6th and 7th before Indian actors took over the list.