Global OTT leader in South-Asian content, YuppTV has entered an exclusive partnership with ETV Telugu in the United States. As part of the association, users will now be able to enjoy the entertainment content from ETV Telugu, while the brand is also introducing ETV Life, ETV Plus, ETV Cinema and ETV Abhiruchi for the first time in the US Market.

Viewers can watch all the popular ETV Telugu shows like Padutha Teeyaga, Jabardasth, Extra Jabadasth, Manasu Mamatha exclusively on YuppTV. The association would help ETV Telugu extend its offerings globally. Commenting on the association, Mr. Uday Reddy, Founder & CEO, YuppTV said, We are overwhelmed to enter into an exclusive partnership with ETV Telugu. Its entertainment content has been successful in striking the right chord with the users and we are happy to make the same available in the US markets, henceforth exclusively. We further look forward to a long term association with channels and would always strive to surprise our users with further such engaging and entertaining associations. 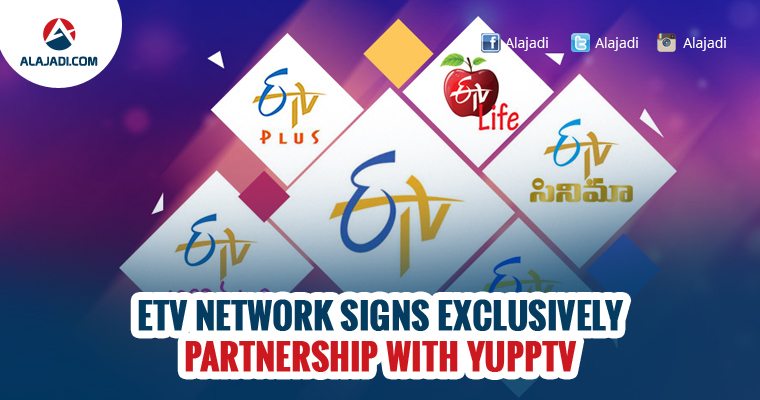 Sharing the thoughts on the partnership, K Bapineedu, CEO, ETV Network added, We have enjoyed our association with YuppTV for a while now. The decision to go exclusive on our partnership with the platform was taken due to the positive response, especially in the US market. Our entertainment shows have become popular over the time in the Indian expat community settled in the US. We further look forward to enhancing the reach of our entertainment content via the incredible penetration and popularity of YuppTV.

As part of the association, fans of ETV shall be able to access their favorite content on YuppTV has a worldwide reach of its Live TV, Catch-up TV, TV SHOWS, Movies and much more video content through a powerful engine built for propagating the video content through six screens namely Connected TVs, Internet STBs, Smart Blu-ray Player, PCs, Smart Phones and Tablets.