Recently, the painful picture of an Orissa man carrying the body of his dead wife on his shoulders for nearly 12 km went viral. And Few days later, a similar incident occurred in Kanpur, when a small child died on his father’s shoulder on his way to the hospital. While the scene of death is always painful, something turned this sad moment beautiful. Now heart-wrenching story set an example in Mumbra of Thane, Maharashtra, where a group of Muslim youths by carrying out the last rites of 65-year-old Hindu neighbour Waman Kadam who died in Almas Colony tenement on Sunday night was employed as a building watchman. 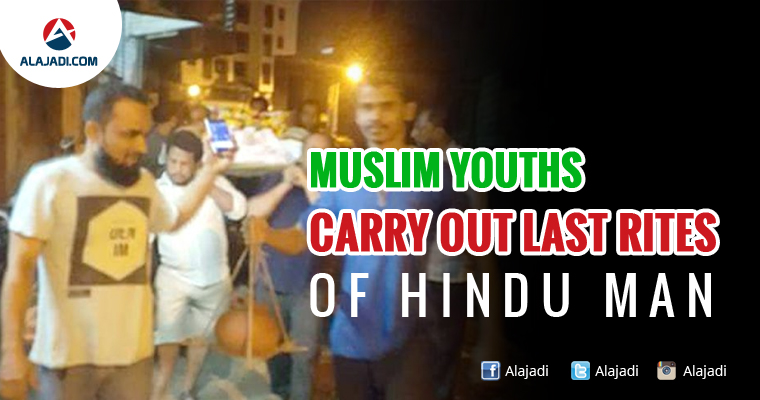 Waman Kadam’s two sons who are from his first wife, and relatives were reluctant to come over at night to help the ailing widow, Vitava, in her hour of need, she requested the youths to help her cremate him. The eight youths — Khalil Pawne, Fahad Dabir, Nawaz Dabir, Rahil Dabir, Shaban Khan, Maqsood Khan, Farooque Khan, Mohammad Kasam Shaikh — immediately started looking for a pundit to perform the funeral rites and even a doctor to give a death certificate.

They purchased necessary ritualistic items like bamboo, rope, earthen pots, incense sticks as well as cloth and a thatched mat. The youths then carried his body to the crematorium at around 3 AM and performed the last rites. Mumbra-Kalwa MLA Jitendra Awhad applauded them in a Facebook post. They were also praised by residents of Muslim dominated Mumbra. The MLA shared two pictures accompanying his post and wrote: “This happens now also …hatred does not work …it’s a everyday story in Mumbra all about #brotherhood”.