One Of The Designers Of National Emblem Passed Away

As all we know The State Emblem of India, as the national emblem of India is called, is an adaptation of the Lion Capital of Ashoka at Sarnath, preserved in the Varanasi Sarnath Museum in India. It was adopted on 26 January 1950, the day that India became a republic. Internationally renowned artist Dinanath Bhargava who designed the national emblem of India, Lion Capital of Ashoka along with five others, breathed his last at the age of 89 in Indore, Madhya Pradesh on Saturday, 24 December 2016. 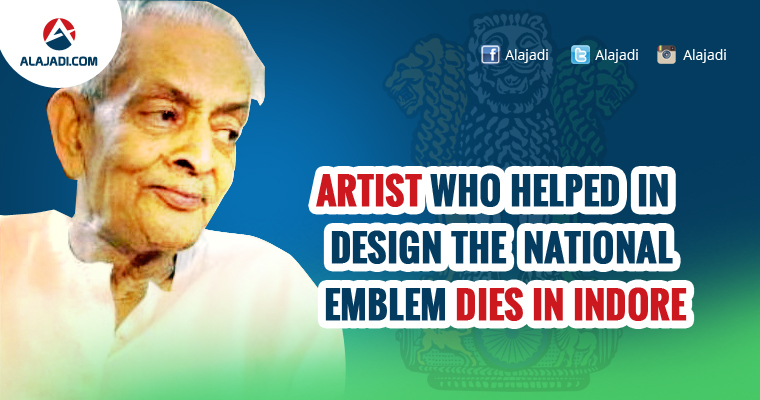 Bhargava had reportedly been suffering from cardiac ailments for almost a decade. He is survived by four children. Born on November 1, 1927, Bhargava was a native of Multai, in Betul district of Madhya Pradesh.  Noted painter Nandlal Bose, then the Principal of ‘Kala Bhavan Shanti Niketan’ chose him for designing the pages of the manuscript of the Constitution of India. He was shortlisted with four other students, including Bhargava, Kripal Singh Shekhawat, Jagdish Mittal and Gauri Bhanja (Bose’s daughter) to design the page borders. Bhargava, who was in the early 20s, was pursuing 3-year Diploma in Fine Arts at Shanti Niketan at that time.

They were all instructed to make the illustration with 34-inch borders representing the styles from different civilisations of the sub-continent ranging from the prehistoric days of Mohenjodaro to the present. The cover was to be adorned with an image of the Lion Capital on an Ashoka Pillar at Sarnath. Bhargava was assigned the task of doing a two-dimension rendition of the Lion Capital with its motto extracted from Mundaka Upanishad -Satyameva Jayate (Truth alone triumphs). Bhargava ended up designing the first 30 pages of the Constitution by the end of 1948.

He created a name for himself with his wash paintings and has been credited with bringing Madhubani paintings on cloth. He showed his expert craftsmanship by designing double decker loom and new Chanderi sarees. The Madhya Pradesh government had honoured him for his contribution to the world of art. He also won a gold medal in Europe’s world art tour in the 1950’s. Bhargava’s last rites were performed on December 26 at Pipliyahana crematorium in Indore. The national emblem of India was adopted by the government on January 26, 1950.