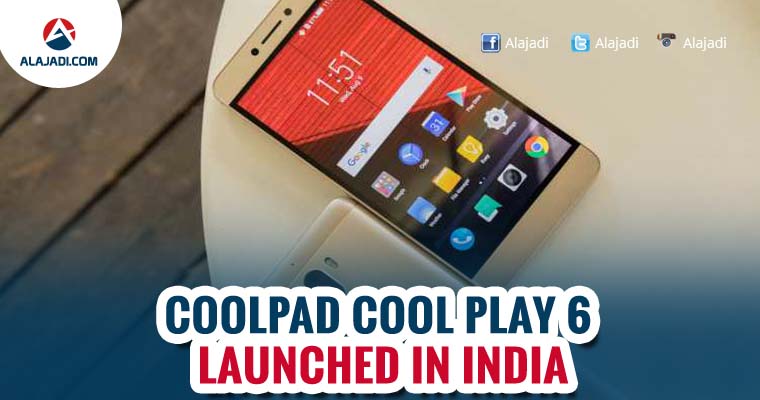 “India and the US has now become two of the largest markets for Coolpad overseas. We are confident that with R&D capabilities and quality products, we will be able to gain an even larger market share in India and other regions,” said James Du, Global CEO, Coolpad Group. The company also plans to establish Coolpad services centres in India in at least 5 cities over the next 6 months.

The smartphone will be available as an Amazon India exclusive. Many smartphones will choose either Flipkart or Amazon India as their online portal to sell their mobiles. “It is only because of the quality of our products that today Coolpad smart phones have a 25% market share on Amazon in the sub Rs. 8000 category. With this launch we not only plan to lead the online space but also to make a bigger impact on the offline market in India,” said Syed Tajuddin, CEO, Coolpad India. The Cool Play 6 has a metal unibody and features a 5.5-inch Full HD (1920 x 1080 pixels) in-cell display. The smartphone is powered by an octa-core Snapdragon 653 processor (Quad 1.95GHz ARM Cortex A72 + Quad 1.44GHz A53), which is paired with Adreno 510 GPU for graphics. The smartphone runs on Android 7.1.1 Nougat operating system out-of-the-box. It has 6GB RAM, and 64 GB of internal storage, with the option to expand with a microSD card.

Cool Play 6 sports dual 13-megapixel rear cameras which come with f/2.0 aperture, phase detection autofocus (PDAF), dual tone LED flash on the back, while in its front lies an 8-megapixel snapper with a f/2.2 aperture for selfies and video calling. The smartphone comes packed with powerful 4000 mAh non-removable battery which claims to offer up to 252 hours on standby, up to 9 hours of internet browsing, 8hours of video watching and 6hours of extreme gaming.