Balayya gets a posh gift from his daughters

It is known news that Nandamuri Balakrishna is currently in Portugal and shooting for upcoming action entertainer ‘Paisa Vasool’ under the direction of Puri Jagannadh. This time Balayya celebrated his birthday in Lisbon, Portugal on 10th June. Daughters Brahmini and Tejeswini have gifted a Bentley car to Nandamuri Balakrishna on his birthday. Both the daughters have personally made it to Portugal where his ongoing 101st film Paisa Vasool is being shot and handed over the car keys personally to their doting dad. 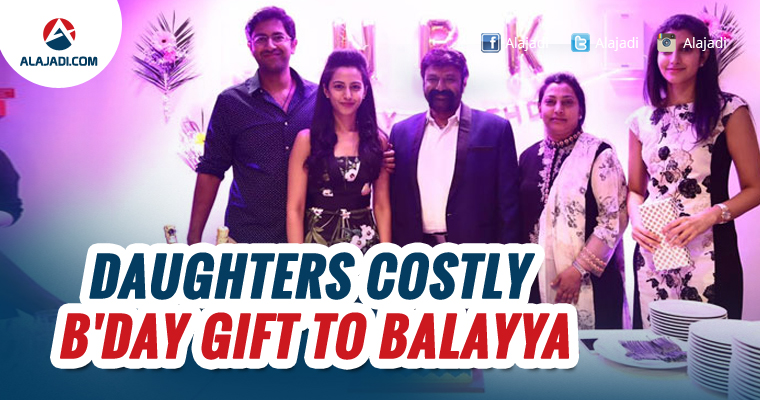 The entire family made it to Portugal. Wife Vasundhara, son Mokshagna, son-in-laws Nara Lokesh, Sri Bharath, grandson Nara Devansh have all attended the birthday celebrations of Balayya. Naturally, Balayya is elated with the whole family flown in and participating in his celebrations.

However, AP IT Minister Nara Lokesh’s pics have not been released to media. Also others seen at the do were the principal unit of NBK 101. Director Puri Jagannadh, producer Anand Prasad and others were seen at the party. Puri and Balayya are getting along well and the duo’s bond is once again visible in the party.