The President, Shri Pranab Mukherjee presented Nari Shakti Puraskars 2016 at a special ceremony/function held in New Delhi on the occasion of International Women’s Day today. The awards were presented to 33 women in recognition of their efforts in rendering distinguished services for the cause of women, especially vulnerable and marginalized women. He said ‘Beti Bachao Beti Padhao’ is an important initiative to prevent female foeticide and provide educational opportunities for female children in the Country. 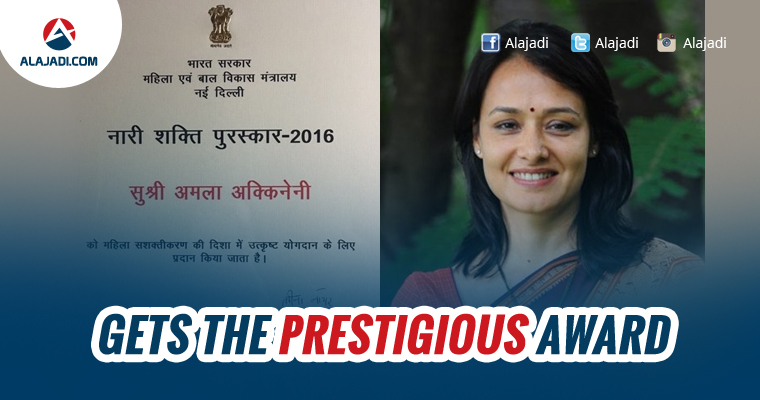 Ms. Amala Akkineni is co-founder and Chairperson of Blue Cross of Hyderabad, a registered animal welfare organization working since 1993 for the welfare of animals in Hyderabad and extending support to other groups. Blue Cross has helped over 4,00,000 animals since inception and continues to rescue, treat, re-home hundreds of injured and abused animals every year besides training volunteers and professionals. For the last 23 years she has been supporting various non-government and government organizations working for social change by addressing issues on girl child welfare, rural women’s empowerment, HIV Awareness, animal welfare, wildlife protection and preservation of the environment. In 2015, she was appointed ambassador for the Swachch Bharat Mission by the Ministry of Urban Development, Govt. of India and is an active volunteer.

She has had a successful career in Indian cinema completing 50 films as leading lady in five Indian languages. Her background in films and television and her social commitment, led her to be appointed as Director, Annapurna International School for Films & Media. In this new role she seeks to fulfill her late father-in-law’s dream to guide young people on a skilled and informed path for professions in Films and Media. Ms. Amala serves on the boards of Children’s Film Society and Satyajit Ray Film Institute. As a film personality, she is constantly available to highlight and support issues that need focus for social change. Her personal interest includes connecting with animals and nature.

Iam so proud of dear amala/she received the Nari Shakti Purashkaar frm the president this morning for all her selfless Sevice to society ??? pic.twitter.com/zn2CGRQfL9

My amazing mother receiving her Nari Shakti Purashkaar award for her outstanding services to society. Couldn’t be more poud !#HappyWomensDay

Hope you continue doing this great work and inspire many more women for many more years.