A day after the final rites of Nandyala MLA Bhuma Nagi Reddy, Andhra Pradesh Legislative Assembly has been gathered on Tuesday to pay homage to departed member of the house 53-yr-old Bhuma. While the whole house was present to pay tribute to Bhuma as a mark of respect to his services, Opposition leader YS Jagan has skipped and his absence was conspicuous in the house. Allagadda MLA Akhila Priya’s heart-touching speech during the Condolence Motion of his father Bhuma Nagireddy is certainly going to move everyone. Akhila Priya: ‘Ours is a new Assembly. I have been waiting for an opportunity to talk about People’s issues here. Unfortunately, I’m speaking for the first time here about My Father¦Never thought something like this would happen!. 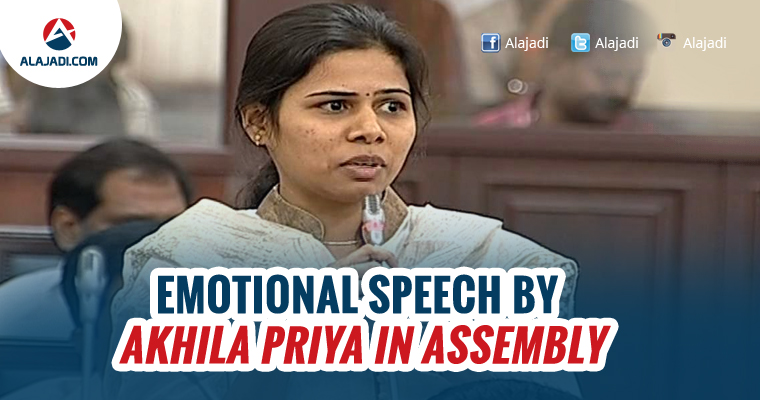 She said that her parents were like made for each other and that ever since her mother passed away her father’s health came down drastically. She said that his father breathed his last on the same bed her mother did and added that he would not hit bed without lighting a diya for her mother’s photo. Akhila Priya said when a media reporter asked how is it feeling to have become an orphan losing both parents in a less span of time she replied that she has the love and support of fellow MLAs and party people that is not making her think like she is an orphan.

The MLA however, said that she expected opposition would take time to speak about services of her father but said she’s terribly hurt to not seeing them in the assembly. She questioned the conscience of Jaganmohan Reddy for not speaking during condolence motion. Akhila Priya may have forgotten Bhuma and she were the first defectors from YSRCP and that led to 22 MLAs defecting to TDP. So wont Jagan have that thing in mind?