As all we know, J Jayalalithaa, the Chief Minister of Tamil Nadu and one of India’s most powerful and popular politicians, died late on Monday in a Chennai hospital, nearly three months after she was admitted there. She was 68. The AIADMK said a total of 77 persons died after hearing about Jayalalithaa’s illness and later on hearing about her death. 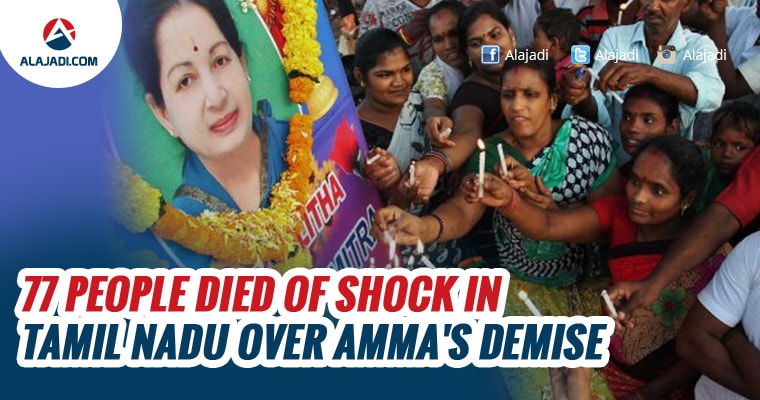 Tamil Nadu’s ruling AIADMK on Wednesday said 77 persons died due to shock after hearing about the illness and later the demise of Chief Minister J. Jayalalithaa and announced compensation of Rs 3 lakh to their families. It also announced Rs 50,000 for a party functionary who allegedly attempted self-immolation and a similar amount to another person who cut his finger off following Jayalalithaas’s demise on Dec 5.

Meanwhile, a central intelligence estimate has put the toll at 30 besides four suicide attempts. The AIADMK release did not specify whether the illness referred to her September 22 hospitalization or the cardiac arrest she had suffered on December 4, a day before passing away. The party also released the list of 77 dead persons, who hailed from different parts of the state.

Further, the party will also bear the medical expenses of the AIADMK functionary from Puthukoorapettai in Cuddalore district who had attempted self-immolation following Jayalalithaa’s illness, it said.